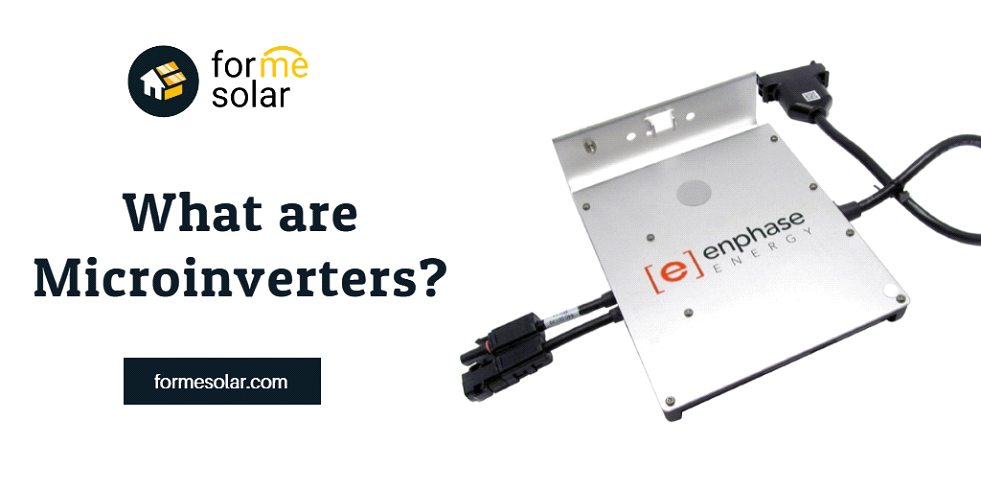 Solar inverters are an essential part of every solar panel installation. And they serve a single purpose: they transform the direct current energy (DC) generated by your solar panels into useable alternating current (AC) power for your home’s appliances.

Over the last several decades, inverter technology has progressively improved to allow homeowners to get the most out of their PV systems. Both string inverters and microinverters provide this function for you as a solar homeowner, but they do it in various ways.

There are several alternatives to consider when selecting an inverter solution for your solar panel installation. And we’ll go over one of the most prevalent forms of inverter technologies: microinverters.

What are microinverters and how do they work?

Microinverters, as opposed to centralized string inverters in a solar energy system, are tiny inverters put directly at the panel location. Most microinverter-based solar panel systems use one microinverter for each individual panel.

Because each microinverter functions independently of the others in the system at the panel site, microinverters are categorized as module-level power electronics (MLPE). For difficult installations or those that face minimal shading, MLPEs are the best solution. Panels can only produce power at the level of the lowest-performing panel on the same string when using classic string inverter technology. This isn’t an issue with microinverters, because each panel has its own inverter, solar panels will continue to work efficiently even if one of the panels in the system isn’t producing energy.

The size of each microinverter is decided by the size of the panel and the quantity of power it is capable of producing (as determined by your location, tilt, and facing direction, among other factors). Clipping happens when your solar panel generates more electricity than its microinverter can convert at any given time, resulting in power losses.

When to use microinverters?

There are several reasons to consider installing microinverters. For one thing, they enable individual panel performance monitoring. Using microinverters, you can compare how each panel performs on its own, rather than analyzing the system as a whole. This can result in faster equipment service since it is easier to detect if a certain panel or microinverter is malfunctioning.

Microinverters are also an excellent choice for more complex setups with panels facing in different directions or inclined at different degrees. If you have some panels facing east and some facing south, utilizing microinverters on each panel will let them function to their full potential when sunlight strikes them since they will not be influenced by production difficulties that other panels in the system may suffer.

Microinverters are often more costly than other types of inverters. The extra upfront expense may be well worth it for the increased monitoring and production benefits. A lower-cost string inverter system might be an excellent alternative if you have a simple installation on a single roof plane facing south with no shadow.

Ability to shut down quickly

New electrical codes demand quick solar system shutdown to protect first responders and firemen from excessive voltage when on roofs or maintaining power lines. These quick shutdown needs are met by microinverters, which have this functionality built into each module.

The main advantage of using microinverters is that you can theoretically produce more solar power. The reason for this is that the currents in solar panels varied somewhat. When solar panels are connected in a string, the current is decreased to that of the string’s least-producing panel.

In these cases, the solar panels will produce varying quantities of power throughout the day, but microinverters will ensure that you capture all of the energy, whereas a regular inverter will lose some of this production.

Microinverters often have 25-year guarantees, whereas regular inverters normally have warranties ranging from 8 to 12 years. The dependability of microinverters was questioned a few years ago, but technology has now caught up with the industry, and the extended warranties on microinverters demonstrate the makers’ trust in their goods.

If you decide to extend your system in the future, you may do so by adding microinverters one at a time. Each panel and microinverter pair may be readily added to your current solar array without the requirement for new string inverters to be purchased, sited, and installed.

Microinverters, string inverters, and power optimizers are the three most prevalent inverter types. Here’s how microinverters stack up against the other two major types of inverters:

The most significant distinction between string and microinverters is that when utilizing a string inverter to wire your panels, depending on the size of your solar system, you only need one or two string inverters (often referred to as “strings”). This simplifies debugging if your system fails since all 6-12 panels supported by the inverter are routed to one location.

String inverters are also less expensive to install and maintain than microinverters due to their reduced wire needs. However, the simpler wiring design may make the future expansion of your solar system more expensive, and it also implies that underperforming solar panels may affect the entire circuit rather than just their individual output.

Power optimizers, unlike micro and string inverters, do not immediately convert direct currents to alternative currents; instead, they “condition” them before sending them to a centralized inverter. These module-level power electronics, or MLPEs, are similar to microinverters in that they can monitor individual solar panel performance and provide flexibility when designing a solar system on a partially shaded roof.

To summarize, microinverters are clearly a value-add, but they should only be used if you need to meet quick shutdown requirements, have panels facing numerous orientations, or have shading difficulties. In most cases, the less expensive conventional inverter is more cost-effective.

Forme Solar Is Ready To Assist You!

Are you thinking about going solar but have some questions? As an experienced and recognized solar company in California, Forme Solar Consultants are ready to assist you in determining which system is ideal for you. Unlike other companies, we adapt each high-quality solar system to your property and budget. Forme Solar is your one-stop-shop for all of your solar energy and microinverter requirements. Get started today!